Serial entrepreneur and investor Shafin Diamond Tejani joined us recently for our ‘Ask Me Anything’ session moderated by Sam Chan, VP of Programs at Launch.

As the CEO of Victory Square Technologies (VST), Tejani has pioneered a unique venture-build model to support startup growth — offering not just funding, but his unique expertise and leadership advice.

Tejani has won numerous awards including Prime Minister’s Volunteer Award, EY’s Tech Entrepreneur of the Year, Person of the Year by BC Tech Association & Canadian Angel Investor of the Year. 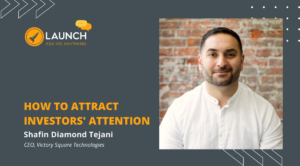 Shafin’s Journey as an Entrepreneur

Shafin Tejani grew up in Vancouver in an entrepreneurial family, spending a lot of time seeing family members around him run their own businesses. As a teenager in high school, Tejani started his company called Twilight Entertainment, hosting all-age dances and organizing events around Vancouver.

Tejani’s big break came in 1996 when he founded iFluRtz – an online dating platform – as a part of his class project while attending Western University in London, Ontario. During this time people generally connected by  meeting in-person, but they could also connect through newspaper classifieds. People could dial into a phone number and leave voicemails for someone they wanted to connect with.

“At the time, we felt that the internet was going to disrupt the way people connected,” said Tejani. “So we started iFluRtz from the dorm room and we were super surprised that it took off!”

Within the first 18 month of its launch, iFluRtz generated $2M in revenue.

There was no looking back for Tejani. He went on to launch over 40 different startups in over 21 countries, employing more than 350 people, and generating over $1billion in entrepreneurial value.

Tejani has been recognized for his achievements with numerous awards including:


According to Tejani, fundraising is an excellent way to establish a network, validate product-market fit, and build a team. “You’re better off bootstrapping at the early stages of your business because it will force you to become resourceful,” Tejani explains.“However, when you have a more precise and believable picture of your business, and it’s time to scale, you should explore all the ways to raise funds.”

How to Attract Investors’ Attention?

Starting a business at a young age was challenging for Tejani. The most significant problem was raising enough funds to start, and keep the different ventures growing. From his experience, to attract investors, one has to:

Tejani suggests that companies should stay focused on their mission, values, and culture and only look for investors who align with their overall vision and avoid tunnel-vision on just getting money.

People are always looking for the next big thing, so it’s tough to find good opportunities. But if you’re building something innovative, you’ll get the deserved attention. Tejani emphasized that entrepreneurs should forget about everything else and focus on what they are trying to develop and why they should build it.

“Founders should not let the lure of big money through venture capital distract them from what is fundamentally important – their vision and their team. They need to be able to sell what they are building,” said Tejani.

He noted that many find themselves looking for their next big funding round to sustain growth and keep investors happy, which is harmful. Having only those goals makes it easier to lose focus on more key objectives.

Entrepreneurs should not underestimate the value of trade sales or mergers with publicly listed companies. According to Tejani, this path often gets overlooked, but it could provide significant leverage.

When asked about investors’ potential interest in Blockchain, Tejani said that the public markets are very interested in blockchain technology because it’s an exciting disruptive innovation that can create new industries. However, there is a great deal of work to be done before all companies, including new startups, fully take advantage of this.

Tejani explains that Web3 is the decentralized internet where information is stored across multiple servers instead of one single computer. It means no person or entity has complete control over user data and information.

“The next generation of the internet will inter-operate with blockchains, decentralized networks, and distributed computing technologies. Web3 is going to make the internet more transparent, safe, and secure.”

Listen to the full episode of Launch AMA with Shafin Tejani and learn more about his journey as an entrepreneur and much more! 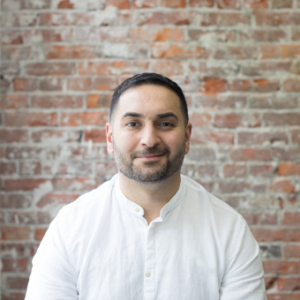 Shafin Diamond Tajani is a serial entrepreneur and VC. Currently as the CEO of Victory Square Technologies (VST), Tejani has pioneered a unique venture-build model to support startup growth — offering not just funding, but his unique expertise and leadership advice.

Shafin has won numerous awards including Prime Minister’s Volunteer Award, EY’s Tech Entrepreneur of the Year, Person of the Year by BC Tech Association & Canadian Angel Investor of the Year. Find Shafin on Twitter & LinkedIn.