Our latest Bits & Bytes podcast features Vancouver-based CPA Alfred Zagloul, specializing in performance management and accounting services to clients through his firm Zagloul Consulting. When he’s not consulting, Alfred can be found serving deadpan coffee reviews on @alfreddrinkingcoffee. Alfred shares his entrepreneurial journey and spills the beans on how he became an influential figure on social media through an Instagram account that started as a fun side project.

While Alfred Zagloul was studying accounting at Douglas College, he thought his professional career would look pretty much like any other accountant – finishing an undergrad degree, getting his CPA license, finding a job, and eventually climbing the ladder to a senior position at said company.

Except, his journey turned out to be a little different, taking some pit stops and pivots along the way…

Today, Alfred runs his consulting firm Zagloul Consulting, providing accounting services to his wide range of clients, specializing in performance management, financial strategy, and efficiency analysis. He is also the face of Alfred Drinking Coffee which provides full reviews of coffee and coffee shops on his Instagram channel @alfreddrinkingcoffee. With over 11,000 followers Alfred has created a niche for himself with his colourful shirts and deadpan coffee reviews.

“The idea of running my own business was not always a part of the plan. It kind of grew over time”, says Zagloul.

After finishing school and working for Blenz Coffee as a junior accountant for a while, Zagloul was hired by his acquaintance Karm Sumal, who is also the CEO and co-founder of Daily Hive. He spent a few years working for the publication building financial structures, policies, budgeting, and overall growth strategy for the company.

It was during his time at Daily Hive, he saw the entrepreneurial spirit around him which motivated him to break away from the mentality of being just an accountant and think about entrepreneurship. “Working at Daily Hive, I was learning so many things. Growing my accounting skill-set, understanding the digital ad space, marketing, sales, and the whole rounded aspect of working in a startup. Because when you work in a startup, you tend to be a part of every conversation, whether it’s in your department or not.”

It was also during that time that his colleagues saw his interest in exploring coffee shops and suggested that he start an Instagram profile dedicated to his coffee exploits. He gave in to the idea, but at the same time, he knew that his account had to be something different.

“Every male influencer at that time was essentially a model, like six-pack abs, shirtless all the time. I needed to do something different. So what I thought was, I’m an accountant, why not be a stereotypical boring accountant reviewing coffee! That’s where the deadpan face and the super analytical captions came in.”

It was soon after he launched @alfreddrinkingcoffee, the account started gaining momentum. Currently, with over 11,000 followers, Alfred continues to review coffee in his unique way, while collaborating with brands locally and across the globe.

At Zagloul Consulting, he takes an educational approach towards accounting. He aims to help his clients understand their finances while evaluating how to efficiently spend every dollar and maximize profitability. “As crazy as that is, as an accountant to say, the reward for me has never been financial, it’s seeing the level of comfort that comes from the clients that are not stressed about the financials anymore.”

Listen to the full Bits & Bytes episode featuring Alfred to find out how he started his own consulting company right in the middle of the pandemic, and why he is indebted to Matt Wu, The Dumpling King! 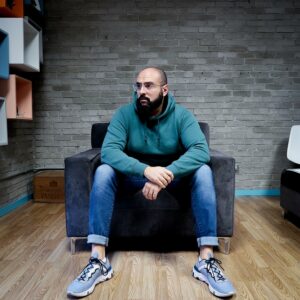 Alfred Zagloul is a CPA with a specialization in performance management. He currently runs his consulting firm – Zagloul Consulting. Growing up in Vancouver, Alfred spent his undergraduate years at Douglas College. After graduating he worked at Blenz Coffee before moving on to work for Daily Hive, a national online publication. He is also the face of Alfred Drinking Coffee through his Instagram channel @alfreddrinkingcoffee. With over 11,000 followers Alfred has created a niche for himself with his colourful shirts and deadpan coffee reviews.