A ‘Bored Ape’ That Turned My Life Around Overnight – Swickie

The latest Bits & Bytes episode features Swickie, she talks about her NFT journey, NBA Top Shot, the rise of Kiki, a Bored Ape Yacht Club NFT who is the first-ever female Ape to be cast in Punks Comic, and the moment where her life changed overnight, quite literally!

For Swickie, NBA Top Shot was “like a gateway drug” into the world of Non-Fungible Tokens (NFTs). Swickie’s first NFT was NBA Top Shot’s 2021 All-Star Pack, which got her excited enough to indulge in the world of digital art and collectibles. NBA Top Shot introduced her to a lot of basic information on cryptocurrencies, trading, wallets, and other NFT terminologies which made it easier for her to explore future opportunities. Swickie continued to build up her NFT collection, got engaged with the thriving Top Shot community by creating content and providing commentary, and she has never looked back.

Opportunities  ramped up for Swickie as she dabbled into other kinds of NFTs. One night one of her Discord group members messaged her at 2 am asking her to buy a Bored Ape! “I don’t even know what that is, I don’t want to spend 200 bucks on an Ape, I’d rather use it for Top Shot” Swickie responded. Giving in to the persuasion eventually she tried to buy it, and the transaction went through.

The moment Swickie bought an Ape caused her life to be turned around, overnight!

It was ‘one’ of the 10,000 unique Bored Ape Yacht Club (BAYC) digital collectibles (digital images minted as NFTs) living on the Ethereum blockchain. At launch, the cost to buy a Bored Ape was 0.08 ETH (roughly USD 280 at the current market rate). All 10,000 Bored Apes sold out immediately after the launch. They are now available to buy or trade on opensea.io, the world’s first & largest NFT marketplace.

“The next morning I listened to the BAYC team’s first Clubhouse chat. I think that’s when I realized that this is not just a picture, something bigger is happening here. The fact that there were so many people listening and they were just so excited.”

BAYC has grown exponentially to become one of the most popular NFTs today, adopted by famous athletes such as Steph Curry, celebrities, and digital art enthusiasts. “What was just a fun JPEG in May 2021, has become an entire movement for technology, blockchain, art, and memberships besides being a really high volume high grossing NFT that is traded,” says Swickie.

Today, Swickie’s Ape, initially bought at 0.08 ETH is trading at 40 ETH at floor price (the lowest price that an NFT can be traded at) which equates to roughly $150,000. A whopping 750x return! Later on, she bought another Ape which is currently worth around 65 ETH. At the height of her portfolio, her total investment of 8 ETH was worth over half a million dollars, Swickie revealed.

Although she could have cashed out, she didn’t. “I figured that more could be done with it,” says Swickie. Her past marketing experience kicked her investment into overdrive.

Swickie saw an opportunity when she heard that Punks Comic was holding a contest to cast an Ape. Bored Ape ‘KiKi’ looked like a viable candidate based on her traits for the contest and also to have her own brand moving forward. She bought KiKi, entered the contest and she won.

It wasn’t easy constantly going against more popular male Apes, but she found support across the community and connections through Discord groups. Kiki became the only female Bored Ape cast in Punks Comic as she made her way to the Elite 8 Ape. The Elite 8 Apes were featured in a display in Hong Kong, which brought worldwide attention to KiKi. 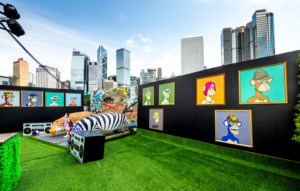 Kiki has already attracted various merchandising and collaboration opportunities. As for her future plans, “I don’t know what the future holds, but I am looking to build her brand. I have a clear path for myself and for Kiki, and I just really kind of want to stay the course,” says Swickie.

Listen to the full episode for Swickie’s tips on getting started with NFTs and the next potential ‘Bored Ape’ to keep an eye on! 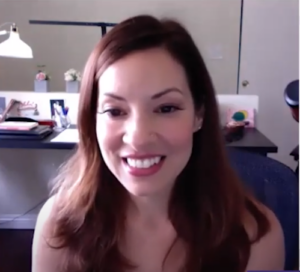 Swickie’s NFT Kiki, is the first-ever female Ape to be cast in Punks Comic.