The Need for More Diversity in the Tech Industry – Amy Tom

Our latest Bits and Bytes podcast features Amy Tom, senior editor and podcast manager at Hacker Noon. Having worked previously in the corporate world before freelancing as a content marketing strategist for tech startups, Amy brings in her unique perspective to the tech industry. In this episode Amy talks about her journey, what it takes to be a woman in tech and how to tackle the prevalent imposter syndrome in the industry.

After wading through the corporate life for a few years, working for companies such as Yellow Pages, Absolute Software and Major Tom, Amy found her niche freelancing as a marketing content strategist for startups and tech companies in North America. Amy is currently working as a senior editor and podcast manager at Hacker Noon, an international community of over 3 million monthly readers and 15 thousand contributing writers, publishing their own articles on various topics related to technology.

Although Amy enjoyed the refreshing startup culture and the delightful job perks, it was difficult to blend in. She has made it a priority to lead the charge for women in the infamously male-dominated tech industry. “It’s difficult as a female to be in the tech industry sometimes, because you really need to make sure that your voice is being heard, and that you are loud enough to have a seat at the table.”

According to the BC Tech Association, women make up only 18 percent of the tech workforce in British Columbia. Although women’s representation has been increasing steadily over the years, there is still a long way to go before achieving gender parity in the tech industry. Launch’s Maple Program, which is designed to get qualified international tech companies and founders move their business to Canada, revealed that out of a total of 82 international companies that successfully completed the program between 2017-2020, 27 percent of them were represented by female founders.

“Everybody has the power to make a change, no matter what your title is”, says Amy while encouraging everyone to voice their concerns within the organization to push for change.

Moving from a corporate world into the tech industry came with its challenges for Amy. “My experience in entering the tech industry has been a lot of imposter syndrome. Because there is  so much tech knowledge out there that you are never going to feel like you know everything.”

Imposter syndrome has traditionally been prevalent in the tech industry, according to a survey by Blind about 58 percent of tech workers experienced imposter syndrome – self-doubt that results from persistently undervaluing your competence in achieving success, while falsely attributing your accomplishments to luck or other external forces.

Amy Tom shares her experiences & talks about combating impostor syndrome in her podcast.

It took a bit of self-motivation and a lot of pep talk to combat imposter syndrome for Amy. “I just tell myself that it’s okay. You got this, you’re good…you deserve a spot here.” Listen to Amy talking about battling impostor syndrome in her own podcast The Art Hustlers’ Studio. 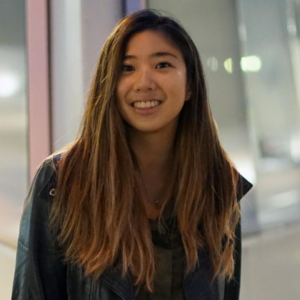 Amy Tom is the senior editor and podcast manager at Hacker Noon, an international community of over 15k contributing writers, publishing their own articles on various topics related to technology. Before getting in to the tech world Amy worked for companies such as Yellow Pages, Absolute Software and Major Tom and freelanced as a marketing content strategist for various tech companies in North America.

Amy currently hosts the Tech Stories podcast by Hacker Noon, with guests including founders and CEOs to developers and interns from the tech industry. Connect with her on LinkedIn or through her social handle @amymtom!